CareersLoginContact Us
back to all
prev
88 of 210
next

The situation has been relatively calm after some sporadic clashes in and around shopping malls and in Kowloon last weekend. No major rallies or demonstrations are planned for the coming Christmas holiday week, and the police are expected to act quickly and with force against any non-sanctioned protests. Last weekend’s unrest was confined to Kowloon’s Mong Kok district and Sha Tin in the New Territories, where police used pepper spray against activists, who damaged businesses on Sunday 15 December. The police used tear gas for the first time in two weeks during clashes after dark in the Mong Kok area.

The media on Saturday 14 December reported that the police had arrested three individuals in Tuen Mun, New Territories, for allegedly testing home-made remote-control explosive devices. The police linked the arrests with a plot to target their fellow officer during protests, but gave no information on the composition of the explosives nor any specific motives for the alleged plot.

Anti-government demonstrators on Sunday afternoon staged so-called ‘Christmas Shop with you’ protests in several major malls to call for a boycott of so-called ‘blue’ businesses, which are perceived as hostile to the protest movement or supportive of the Hong Kong and Chinese governments. While rallies at Cityplaza in Tai Koo Shing, Times Square in Causeway Bay and Harbour City in Tsim Sha Tsui ended peacefully, some activists gathered at the Popcorn Mall in Tseung Kwan O, New Territories, where they damaged the doors of a branch of the Yoshinoya restaurant chain and placed anti-government posters on a Starbucks café, a Best Mart 360 shop and outlets operated by the Maxim’s Group. A confrontation at Telford Plaza in Kowloon Bay ended when police used pepper spray to disperse local residents.

The most serious clashes occurred at Sha Tin’s New Town Plaza, where a small group of activists smashed glass barriers and stormed into several restaurants operated by Maxim’s Group, shouting at diners, spraying graffiti on the floors and damaging shops. Police used pepper spray on the activists, arresting at least five of them. During the clashes a woman was spray-painted in the face after arguing with protesters. Another woman accused of taking close-up images of protesters had her phone smashed. Other protesters reportedly discharged a smoke bomb at the bus terminus outside the Sha Tin Mass Transit Railway (MTR) Station Exit A, with no damage reported.

At an earlier gathering at Tamar Park in Admiralty, Hong Kong Island, thousands of people opposed to the anti-government protests rallied to support the police and the local and central governments. At the same time in nearby Edinburgh Place, Central, hundreds of social workers pledged to stage a three-day strike from Tuesday 17 December. 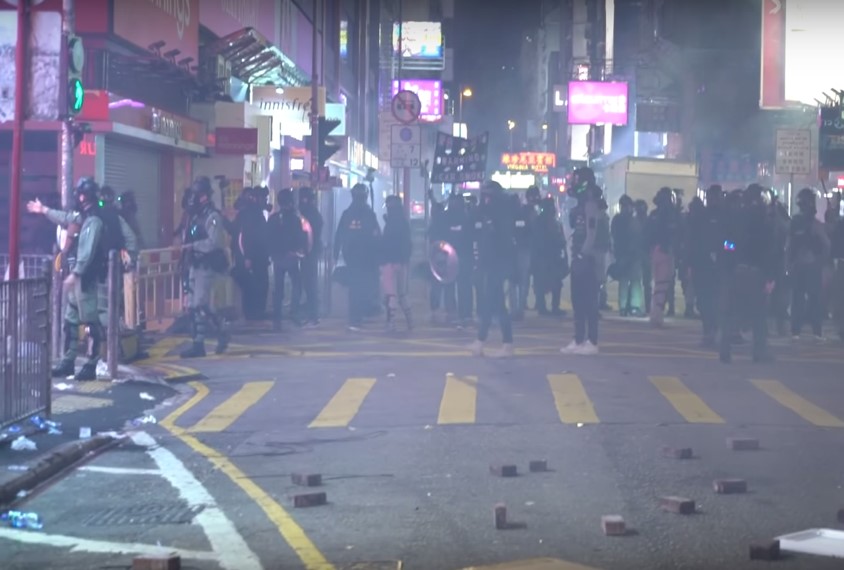 Tensions escalated in Mong Kok around 2100 hours on Sunday when police used pepper-spray against a crowd that had gathered near the Langham Place shopping centre. Police accused them of illegal assembly. Tear gas was later used at the junction of Soy Street and Sai Yeung Choi Street South, where protesters scattered bricks on the road. Activists at the junction of nearby Nathan Road and Argyle Street threw objects at the police, smashed some traffic lights and set a number of fires. The police responded with more rounds of tear gas until the clashes died down after midnight.

On Tuesday 17 December, about 200 social workers gathered at Edinburgh Place, Central, to call for people to join a three-day general strike over what they described as a ‘humanitarian crisis’ facing Hong Kong. Elsewhere, ‘Grieve with you’ rallies took place in multiple locations, including Kowloon Bay, Tsim Sha Tsui, Sha Tin and Kwun Tong, where protesters gathered to write Christmas wishes to injured and detained protesters. Similar lunchtime rallies took place each day throughout the week, with no violence reported.

While the social sector general strike failed to generate a significant response, on Thursday 19 December several hundred people marched from Wan Chai to nine foreign consulates (Australia, Czech Republic, Italy, The Netherlands, UK, EU, Japan, US and Canada) in the afternoon to call on the international community to ‘save’ Hong Kong from its ‘humanitarian crisis’ and pass their own versions of the US’s Hong Kong Human Rights and Democracy Act. Police were deployed, but no violence was reported.

On 16 December, China’s President Xi Jinping used a meeting with Hong Kong’s Chief Executive Carrie Lam to highlight Beijing’s full support of her while also emphasising the need to end the violence. We warn that any moves by Lam’s administration to actively seek to enact Xi’s dictum and seek to use increased force against now often minor actions may reignite the protest movement and reverse the perceived gains of recent weeks. While the festive season that encompasses Christmas next week, the calendar New Year a week after and the Lunar New Year in late January is likely to remain generally peaceful but limited clashes as those experience last weekend, will continue.

Online activity indicates that protesters on Saturday 21 December plan to stage a second round of ‘Christmas shop with you’ rallies throughout the afternoon to boycott shops perceived to be either pro-government or anti-protest movement. They propose targeting Kowloon’s Harbour City mall complex, with shops located in the Tsim Sha Tsui district also likely affected. Residents and visitors are advised to be aware of the potential for disruption in the area and be prepared to leave immediately if it becomes evident confrontation is likely.

Another rally with the potential to become violent is scheduled at Yoho Mall in Yuen Long, New Territories, from 1500 to mark the five-month anniversary of the 21 July attack by alleged organised criminal groups (‘triads’) against protesters and ‘civilians.’ Previous similar events on the 21st of each month since August have all ended in varying degrees of violent confrontations. As a result, we advise against travel to or through Yuen Long district especially after dark on Saturday.

On Sunday 22 December, a rally to show solidarity with ethnic Uyghurs in China’s Xinjiang province is planned at Edinburgh Place, Central, from 1530. We consider the rally is likely to attract a significant number of people with the potential for some unrest, notably once it becomes dark.

On Tuesday 24 December, peaceful demonstrations are planned at 12 shopping malls across the territory from 1900 to 2200. (See details below). A peaceful march from Tsim Sha Tsui Clock Tower to Nathan Road is scheduled from 2000 to 0100 on 25 December. There is the potential for violence if activists chose to confront the inevitable police presence.

On Wednesday (Christmas Day) 25 December, several marches are scheduled at multiple business districts (see details below) in an attempt to disrupt the holiday festivities. Protesters also announced a boycott of ‘blue’ shops throughout the afternoon. The shops have not been announced, but activists recommend any business operated by the Maxim’s Group and malls linked to MTR stations be targeted. We warn if these actions go ahead there is high probability of clashes between rival groups and the police. We advise anyone planning to use the MTR to check whether protesters have gathered in or around the station before entering the system.

‘Lunchtime protest’ rallies are scheduled at the following locations:

The ‘Never Forget 721’ sit-in is scheduled at Yoho Mall in Yuen Long, New Territories, from 1500.

The ‘Say No to Pork Barrel Politics – Rally organised by the Silver-Haired Marchers’ is scheduled at Edinburgh Place, Central, from 1300 to 1700.

The ‘Christmas Shop with you’ is scheduled in Harbour City, Tsim Sha Tsui district, Kowloon.

The ‘Human Rights Rally of Solidarity with Uyghur’ is scheduled at Edinburgh Place, Central, at 1530. Letter of No Objection pending.

The ‘Drink with You – Hong Kong Insurance Union’ is scheduled at Hong Kong Cultural Centre, from 1600 to 2000.

The Music Industry has scheduled a five-day strike between 23-27 December at Chater Garden, Central, from 1900 to 2100.

‘May Peace Return to Hong Kong’ rallies are scheduled at the following malls from 1900 to 2100:

‘Masked Shopping Spree - Uncooperative Movement’ is scheduled at any mall (recommended: shops operated by Maxim and MTR related malls), from 1600 to 2400.

‘Write with You rally’ occurred at the following places during lunchtime:

‘Christmas Shop with You rally’ occurred at the following places throughout the afternoon:

Lunchtime protests occurred near IFC in Central, Causeway Bay and One Island East in Tai Koo, all on Hong Kong island.

1000:  Around a hundred people rallied at Edinburgh Place, Central, to participate in the social sector general strike.

‘Grieve with you’ rallies occurred at the following locations over lunchtime: