CareersLoginContact Us
back to all
prev
28 of 90
next

This version of the Americas Brief newsletter examines the government's response to fuel shortages in Cuba, gang violence in Haiti, and demonstrations in Nicaragua.

22 April: The US government announced an end to its waivers that had allowed certain countries, including India and China, to continue buying oil from Iran, despite the re-imposition of US sanctions against Tehran. Washington has warned buyers to stop purchasing Iranian oil by 1 May, or risk penalties.

Why it matters: The waivers were implemented after the US re-introduced sanctions against Iran in November 2018, following the US exit from an accord between Iran and six further major countries to curb the Iranian government's nuclear programme. Eight countries, including India and China, had been granted six-month waivers, which were expected to be renewed. Despite US reassurances that exports from the United Arab Emirates and Saudi Arabia will offset the reduction in oil supplies, the sanctions are due to adversely impact the global supply chain. A2 Global advises businesses to comply with the end of the waivers, as failure to do so can result in sanctions. Logistics managers are advised to factor this announcement into their operational planning and adjust their supply chain accordingly.

18 March: Media outlets reported that the board of the Port of Los Angeles' Harbor Commissioners delayed a vote on a construction permit to automate some functions at Pier 400 ' one of the largest container terminals in the Western Hemisphere ' to develop driverless cargo trucks services at the port. This came after over 1,200 dockworkers protested against the plans, effectively delaying the decision for a second time.

Why it matters: Danish container ship operator Maersk and its subsidiary APM Terminals are poised to press ahead with automation, if the vote is passed. While port operations appear to have been largely unaffected, this is the second one-month delay to the project. Further delays are probable in the three-month outlook, as the grievances of the dockworkers remain unaddressed. A2 Global advises businesses reliant on the operations at Pier 400 to monitor further announcements relating to possible strike action and voting at the commission. This will give an indication of potential impact on their operations in the 30-day outlook.

17 April: US Secretary of State Mike Pompeo announced the lifting of restrictions on US citizens seeking legal redress after the mass confiscation of property during the revolution in Cuba in 1959.

Why it matters: Although the Helms-Burton Act of 1996 effectively gave Americans the right to sue other companies that benefited from the confiscations, all US presidents since Bill Clinton have suspended a key clause in the regulation, due to fears of a foreign policy backlash. The move would therefore be unprecedented, and will increase political risks to companies seeking investment opportunities in Cuba as that economy is opening up. Although it is unclear to what extent there is appetite among US companies to launch legal proceedings, A2 Global notes that there are several large Canadian and European companies operating in Cuba at risk of such complaints. Should Trump go ahead with the plans, companies that could be at risk should assess how it will impact their operations and strategy, and take steps to build a legal defence in the event of of a lawsuit. 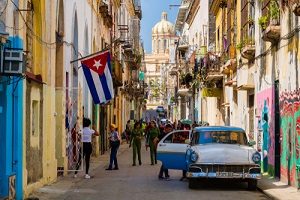 18 April: The Cuban government ordered its state-run power grid to further reduce its electricity generation. The 10 per cent cuts are being implemented nationwide in a bid to save oil.

Why it matters: As over 95 per cent of the country's electricity is produced by oil-fueled power plants, the cuts are set to have an adverse impact on the overall electricity supply. The implementation of power cuts, which began in 2016 due to an economic slowdown and supply shortages caused by the political crisis in Venezuela, have so far exempted essential services and residential use. This is likely to change, given recent US sanctions imposed on businesses and ships carrying fuel from Venezuela to Cuba. Although blackouts have not been scheduled so far, the cuts are due to increase their likelihood. To mitigate the impact of blackouts, A2 Global advises businesses to ensure that security equipment such as electric fences, gates and alarm systems have backup power sources. Furthermore, should surge protection not be available, electronic devices should be unplugged during outages to prevent damage once power is restored. Additionally, business travellers and staff should ensure they have spare flashlights and that emergency contacts readily accessible.

22 April: Two people were killed and two injured in an armed attack in the Delmas district of the capital Port-au-Prince, yesterday (22 April). According to local media, this was linked to an earlier confrontation between two gangs in the town of Simon, near Toussaint Louverture International Airport (PAP), which serves the capital. Reports did not say what weapons were used in the attack.

Why it matters: This is the latest incident in an escalation of gang-related violent activity in the past few months. Over several days last week, repeated armed confrontations between gangs took place in the Port-au-Prince commercial neighbourhood La Saline, where the parliament is located. On 19 April, a gang attacked the police station in Petite Rivi're, in Artibonite commune, 118km north of Port-au-Prince. Two people were killed in that attack. Business travellers should remain vigilant at all times and keep movements to a minimum. In view of the gang confrontations in the vicinity of PAP, monitor local and international media, regularly review departure options, and only travel to the airport if advised by the authorities that it is safe to do so.

17 April: A total of 636 prisoners were released in a move by President Daniel Ortega to appease protesters ahead of planned demonstrations today, organised by the UNAB coalition. These are to mark the anniversary of the start of anti-government protests. The day before, police refused the UNAB permission to conduct protests in the capital Managua. Protesters will gather at 1400 local time at the Rotonda Centroam'rica, a large roundabout in the Distrito 1 area, before marching 1.5km north-west to the Alexis Arg'ello monument.

Why it matters: Protests are still set to occur despite organisers not being granted an official permit by the police. The UNAB has demanded the government to release hundreds more prisoners who were detained during protests that have been ongoing since April 2018. Individuals in Managua should monitor updates, exercise heightened vigilance, anticipate a large security presence, and avoid the march as a precaution. Allow additional time for travel.

South America
Colombia ' Floods kill 13 people as rainy season begins COLOMBIA ' Natural hazard risk: High
17 April: The country's rainy season, which started on 1 April, has affected thousands of people through heavy rains, thunderstorms, floods, and landslides. Communities in Vig'a del Fuerte, Antioquia department, have been isolated by floods since 7 April. As of 15 April, flooding and landslides in the southern and western provinces of Huila, Caldas, Nari'o, Caquet', Cauca, Antioquia, and Cundinamarca departments had killed at least 13 people and injured at least as many, with numerous houses destroyed or damaged.
Why it matters: Colombia's disaster management agency UNGRD has recorded 57 severe weather events, including 19 floods and 24 landslides. Landslides and flood alerts were issued for western, central, and southern departments. Individuals in the impacted areas should monitor local forecasts, exercise extreme caution and evacuate if ordered to do so by the local authorities. Business travellers should monitor forecasts and re-confirm travel plans. Drivers, particularly of haulage vehicles, should reduce speed, keep to main highways, and postpone non-essential journeys in impacted areas. Firms with operations in the impacted area should factor the flooding into operational planning, adjusting service availability accordingly. Be aware that floodwater may contain pollutants and disease-causing bacteria. Poor conditions also raise the risk of cholera, which flourishes in insanitary conditions
Peru ' Heightened travel risk as tourist group robbed by armed gang PERU ' Travel risk: Elevated
16 April:'A group of tourists on an adventure holiday in the southern Amazon jungle was robbed at gunpoint by six masked men, according to reports in the local press. Their bus, which contained 22 people ' including tourists, a driver, and tour guide ' was halted by the gang on a forest track on 14 April around 1500 local time. The group, which included at least 11 British tourists, was travelling from Padre Aldamiz International Airport (PEM) which serves Puerto Maldonado, capital of south-eastern region Madre de Dios, to a jungle eco-lodge about 19km outside the city. The trip was organised by Canada-headquartered G Adventures, which offers adventure trips for small groups. Reports did not specify what type of arms the gang were carrying. The identity of the group responsible is not known.
Why it matters: This is the second major crime incident against foreign tourists in the same area this year; on 21 February, armed men robbed a hostel in the south of Madre de Dios. While remnants of the Sendero Luminoso (Shining Path) Maoist non-state armed group are still active in parts of Peru, these are predominantly in central areas of the country. Sendero Luminoso more likely to target police, military forces, and local authorities. This attack is more likely to have been conducted by bandits targeting tourists. Such incidents are most frequent on popular hiking trails around Huaraz, in the northern Callej'n de Huaylas valley, and jungle treks in the south. Travel companies should review safety arrangements for clients and personnel and ensure they meet duty-of-care requirements.
back to all
prev
28 of 90
next
Save & Close